All-natural ingredients used in a synergistic conjunction in order to bring you the greatest benefits. 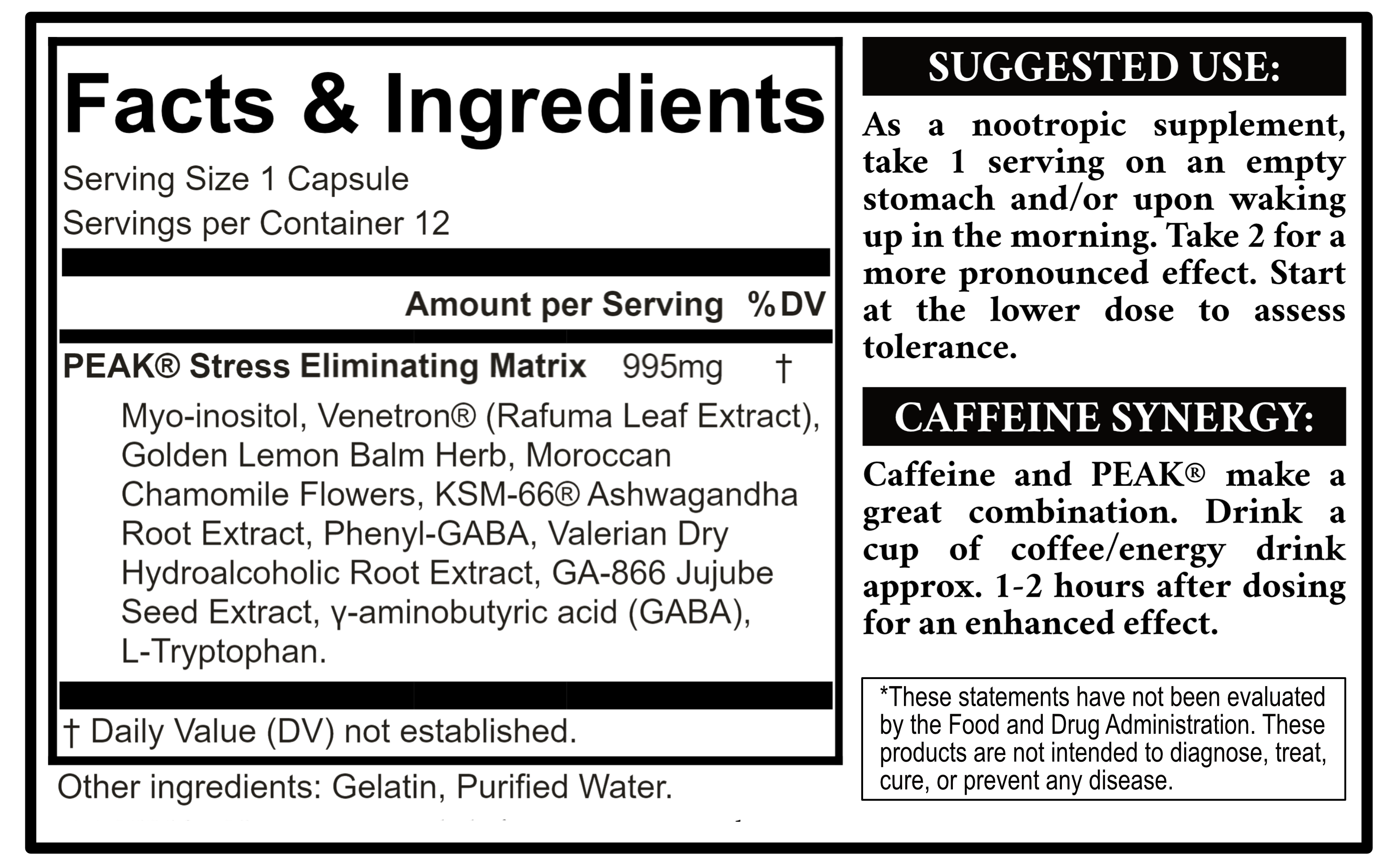 If you suffer from any of the following, PEAK® provides rapid relief:

Let’s take a closer look at the vitamins, minerals, and nootropics that make up the PEAK® formula that so many have come to rely on to crush their day. 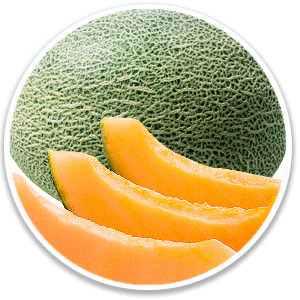 Although inositol has many uses for the brain, this supplement is predominantly useful for decreasing symptoms related to anxiety. This ingredient is also useful as an antidepressant and has evidence suggesting it can prevent panic attacks. Other studies of inositol suggest it could be potentially useful in combating symptoms of Alzheimer’s disease as well. There are a host of other benefits related to general health (such as female fertility or insulin sensitivity). Inositol is a molecule that typically refers to Myo-inositol, which is involved with cellular signaling and has a significant amount of scientific evidence to back the claims.

Inositol is a compound that interacts with cellular signaling. This has implications for Alzheimer’s disease, but it is more often used for anxiety, symptoms of depression, and panic attacks. 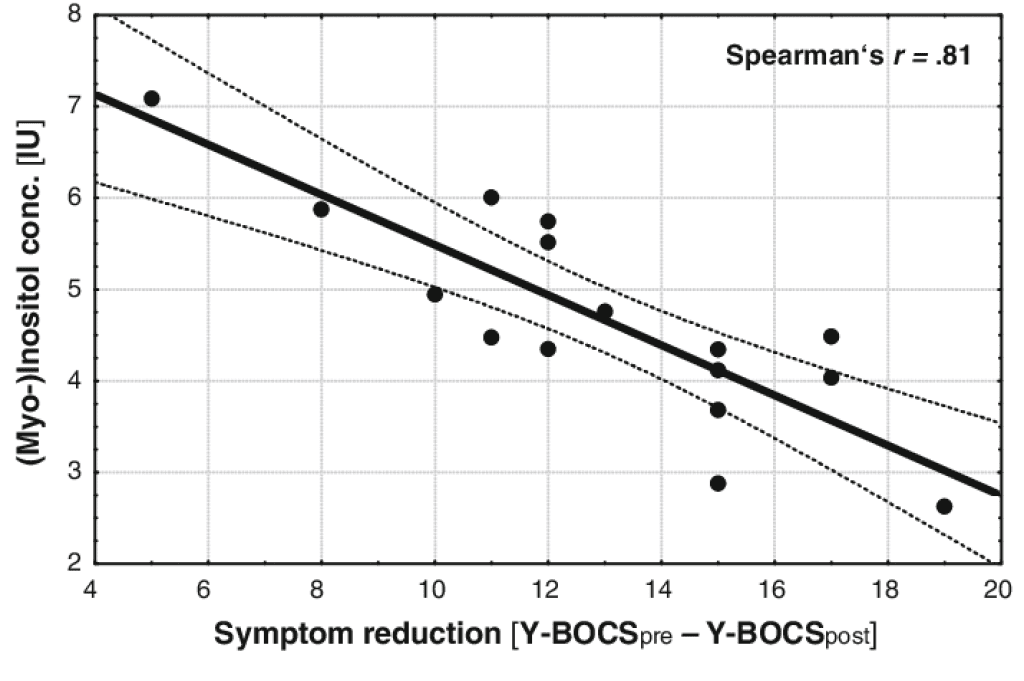 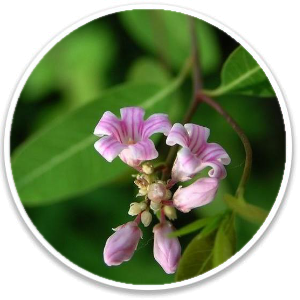 In Chinese culture, Rafuma leaves have been used to make tea for thousands of years. Originally, the leaves of the small shrub have been shown to possess anti-lipid peroxidation and anti-oxidant effects as well. In recent times, Rafuma has gained popularity in the west due to its many health benefits. Rafuma is said to have certain sedative, cardio-protective and diuretic properties that are well researched. Rafuma has been proven to have mild anti-depressant and anti-anxiety effects.

Rafuma leaf is a traditional and popular Chinese herb with a long history of use as medicine and tea. It was originally used for treating hypertension. Rafuma has been studied in animals and is being tested in human trials. Most of the studies show Rafuma leaves have a blood pressure-lowering potential and also, similar to many herbs, have antioxidant activity. Recently, studies indicate that Rafuma has antidepressant potential and can reduce anxiety. 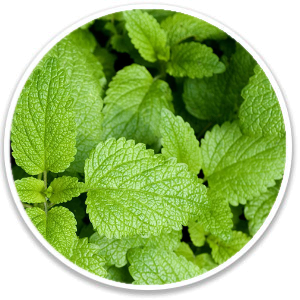 Depending on your unique brain chemistry, lemon balm can be innocuous, but a powerful sedative. This plant species is from the Mediterranean and has been used to reduce anxiety, induce calmness, and even helps to improve cognitive performance. Traditionally consumed in tea form, lemon balm (also known as melissa officinalis) has a calming effect especially on those experiencing stress. It also helps aid in memory enhancement and even processing speed, which is considered downstream effects of the calming factors.

Lemon balm is a plant native to the Mediterranean, which is used for relaxation, stress relief, and sleep benefits. 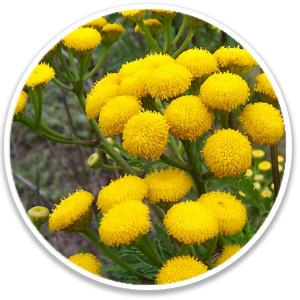 Considered to be one of the most ancient and versatile medicinal herbs known to mankind, dried chamomile flowers have numerous, widespread health benefits thanks to their high level of disease-fighting antioxidants like terpenoids and flavonoids. Chamomile’s vital antioxidants are found in the plant’s potent oils and are the main contributors to its natural healing properties. An effective alternative medicine with almost no known negative side effects, chamomile has been used for nearly 5,000 years in standardized tea, herbal extracts, and other forms to promote tranquility, vitality, and longevity. The fact that chamomile is an anti-anxiety and anti-depression herb was confirmed by a clinical study at the University of Pennsylvania School of Medicine. This study was done in 2009, but its data and findings were re-investigated and confirmed last year (2020).

Chamomile is a herb that has been used in traditional and herbal medicines for thousands of years. According to the University of Maryland Medical Center, the ancient Egyptians, Romans, and Greeks used chamomile for its multitude of physical and mental benefits. Among its many other uses, chamomile may help to reduce anxiety, ease insomnia, calm upset stomachs and soothe minor burns. 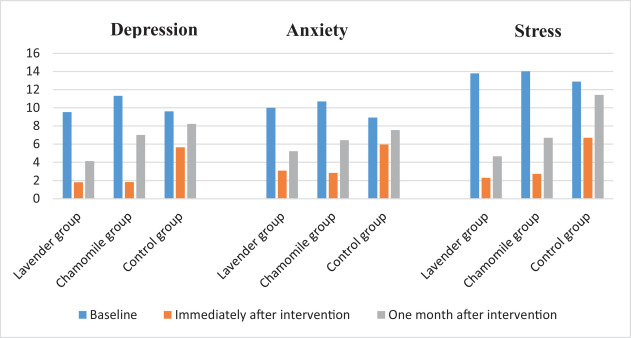 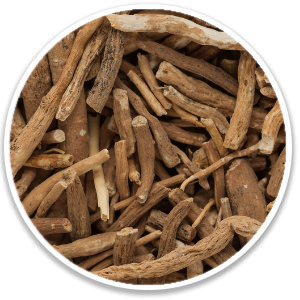 Imagine being in rural India 3000 years ago where prescription drugs are a completely unknown concept. For many ancient Indians who suffered from anxiety, the answer was Ayurvedic medicine, with ashwagandha being the most commonly used. This herbal anxiety reducer has seen continued usage in India even until now and modern science is proving our ancestors’ claims. Traditional Ayurvedic medicine noted many benefits of ashwagandha and modern science has shown us how it helps in anxiety-reduction, improved neuroprotection, and even anti-cancer protection. There is some evidence that it can also help to improve focus and concentration, but the primary use of ashwagandha is for its anxiety-reducing properties. Typically the root extract is the psychoactive part of the plant, which provides the majority of mental health benefits. Ashwagandha is an adaptogen and is one of the most popular herbs still used in Indian medicine today.

Ashwagandha is an Ayurvedic herb used for the past 3000 years. It has been used to treat anxiety and stress, but can also improve cognitive abilities and has neuroprotective and cancer-reducing properties. 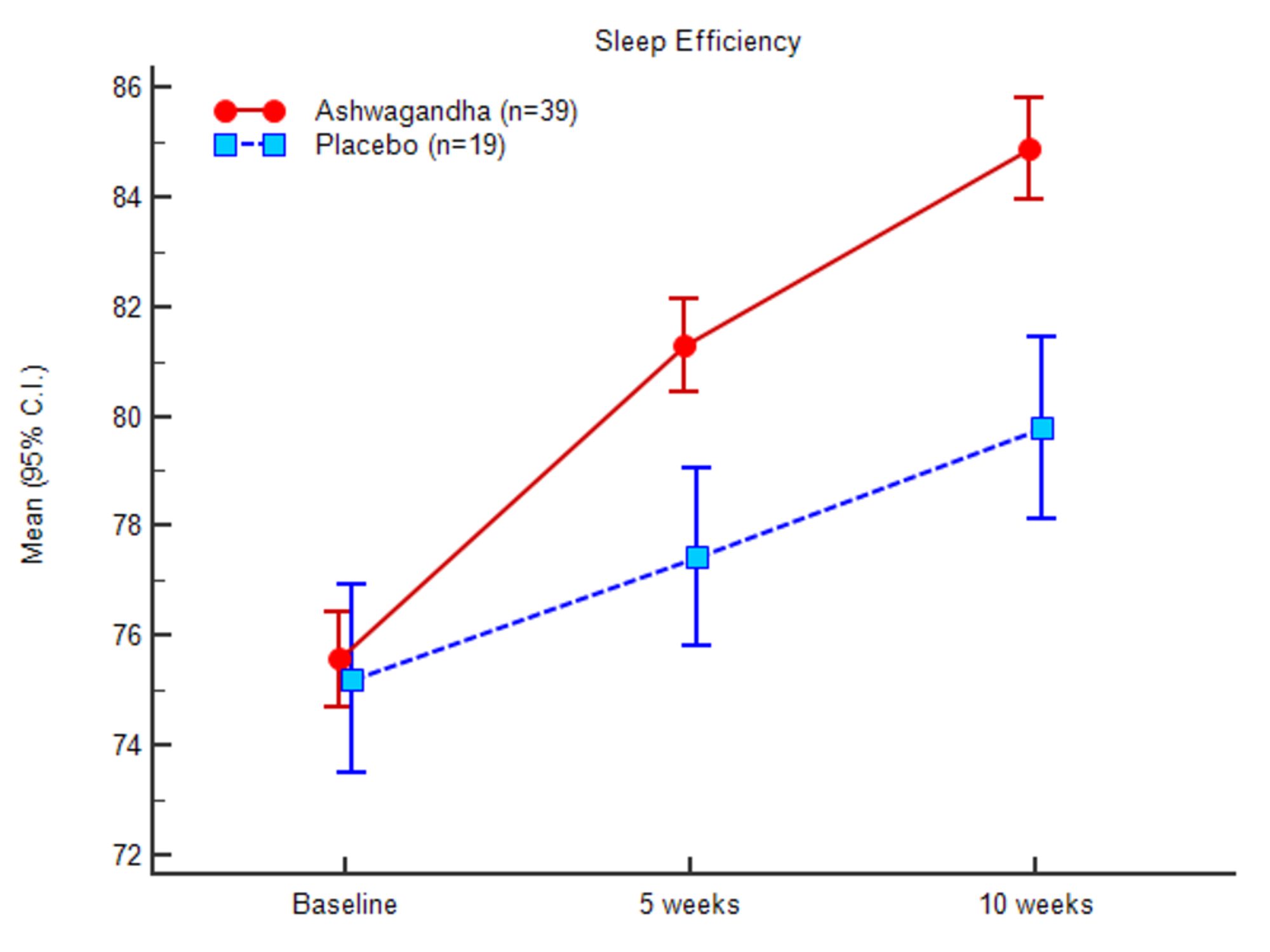 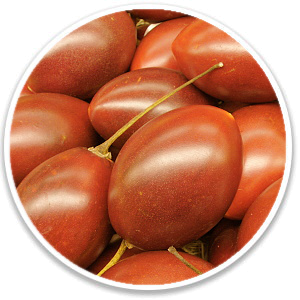 Soviet scientists were hard at work trying to turn their soldiers and cosmonauts into superior humans. The fruits of their labors are seen in nootropics, such as phenyl-GABA, which were created in the 1960s for increasing cognitive potential. phenyl-GABA is the brainchild of Soviet scientists and is an analog of the neurotransmitter GABA. It is structurally similar to GABA, which offers advantages for relaxation, treating depression, PTSD, and a host of others. The primary benefit of phenyl-GABAis as an anti-anxiety compound and many people use this for increased mood (euphoria even).

Phenyl-GABA is a powerful supplement developed in the 1960s for Soviet cosmonauts. Now, it is used recreationally to fight anxiety and help with relaxation. 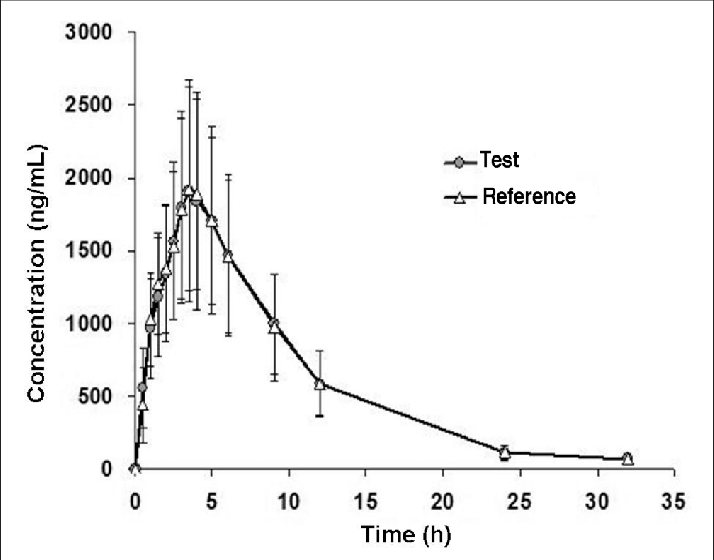 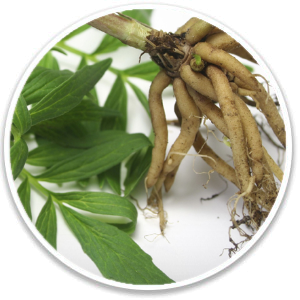 Sleeping like a baby is a luxury that many people with full-time responsibilities cannot often enjoy. With all the chaos of modern lifestyles, sleep quality often takes a nosedive. Valerian root is a natural substance that helps modulate sleep in addition to anxiety and other aspects of the stress response in the brain. Primarily, valerian root is well studied for sleep latency (meaning the time it takes to go to sleep). Studies suggest valerian root not only helps you get to sleep faster but improves the quality of sleep as well. This naturally helps people who suffer from insomnia, anxiety, and even situations where people are feeling fatigued. Valerian root is often consumed in tea form, but extracts are also useful for stress relief. Many of the sleep benefiting effects are related to reducing stress and anxiety, which (in nootropics like Bacopa) are often associated with improved mental performance as well.

Valerian root is a natural sleep aid used for hundreds of years. Modern scientific literature supports the claims that valerian root can assist with sleep quality by interacting with GABA and glutamate receptors. 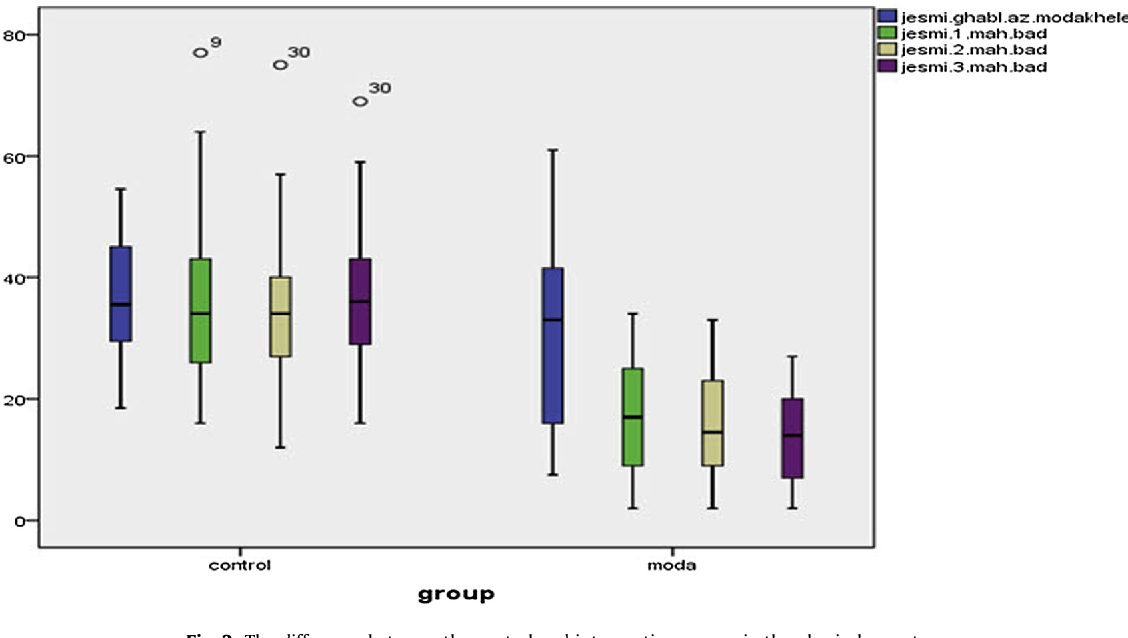 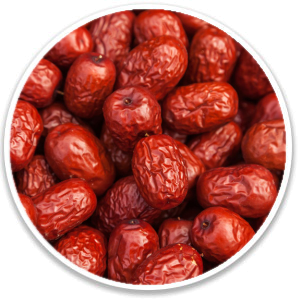 Jujube seed has garnered a large amount of scientific research in recent years, with most studies citing its mental therapeutic effects which come from the glycoside saponins found in the fruit called jujubosides. The anxiolytic and sedative properties of the fruit stem largely from its antagonism/inhibition of the serotonin receptor 5HT1A, which appears to be mediated by a specific flavonoid called spinosin. Activation of 5HT1A receptors inhibits the release of serotonin in nerve terminals and influences the secretion of stress hormones such as cortisol, growth hormone, and endorphins.

Jujube seed, also commonly referred to as Suan Zao Ren or the Red Chinese date, is a fruit native to Asian nations including China, Japan, Korea, and India. Its use dates back nearly 2,500 years in traditional Chinese medicine as a potent stress reliever, digestive aid, and even as an aphrodisiac. 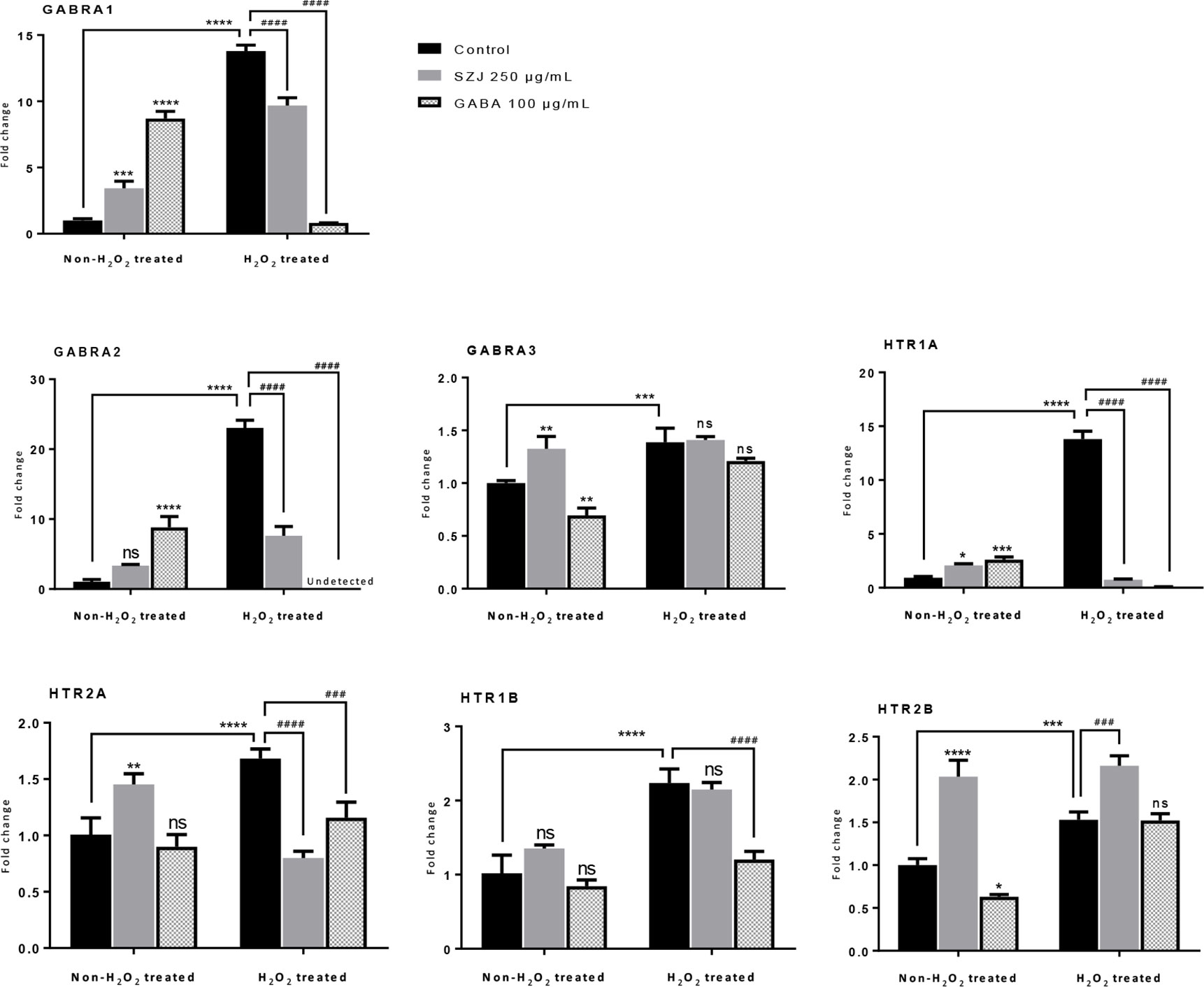 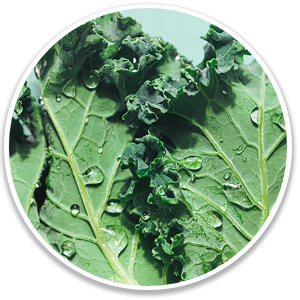 The GABA neurotransmitter is one of the four main brain chemicals in the brain, which regulates feelings of calmness and sleep. Even though increasing GABA levels may be important for some people, consuming GABA by itself is not always useful due to poor absorption through the blood-brain barrier. That’s why it’s always best to consume in a proper blend that will improve maximum absorption rates. Hence, our PEAK Supplement blend.

GABA is one of the four most important neurotransmitters in the brain. GABA influences excitability and more of this molecule can increase relaxation and feelings of calm. Unfortunately, supplemental GABA (by itself) is not well-absorbed. Using synergistic and dynamic blends is what allows proper absorption of this amino acid. 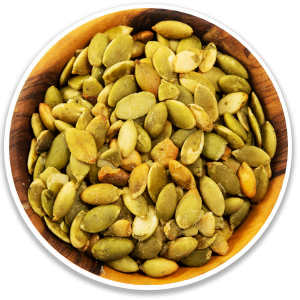 As an amino acid, L-tryptophan — or more simply, tryptophan — comes from the protein-containing foods you eat. Your body uses it to build the new proteins it needs. Beyond this vital job, tryptophan has other roles. After it gains entry into your brain, it’s converted into the neurotransmitter serotonin. It also protects you from a niacin deficiency, because your body can turn tryptophan into niacin.

L-tryptophan is an essential amino acid that helps the body make proteins and certain brain-signaling chemicals. Your body changes L-tryptophan into a brain chemical called serotonin. Serotonin helps control your mood and sleep.

Vita Supplements’ mission is to create a lifestyle supplement line that is not only meant for gym enthusiasts, but for everyone and anyone. Our goal is to create supplements that improve your well-being, help you achieve your goals, and help you conquer those obstacles life throws at you. By optimizing your skills and improving your weaknesses, we help you become the best version of yourself. Thus, after reaching those goals and accomplishing feats you thought were impossible, you begin to realize that you had it in you all along. That is what we stand by. That with our help, you realize what you are truly capable of.